Things have been wild and crazy here at the Tiki Port and now that summer is over I can share some of the fun and good news.

Mai Tai One On was chosen for a special 99c week long promotion on Amazon’s Kindle and thanks to my friends and fellow authors, my family and everyone who craves the island lifestyle or dreams of a trip to Hawaii…Mai Tai One On soared up the e-book charts and reached #15 in the Kindle Store, #1 in Women’s Sleuth Mysteries and #11 in Fiction and Literature. I was right up there with my favorite Women’s Sleuth authors, Janet Evanovich…hey, so it took a 99c price tag to do it? At least Mai Tai One On was read by a whole LOT of folks and has gained great reviews. What a way to get the fire balls rolling!

We’ve spent a lot of time dispensing Mai Tais and other tropical beverages to guests in the Tiki Port (formerly the car port) here in our Hawaiian hideaway. Guests have included singer and long distance swimmer Diana Landis, the incomparable Ellen Landis, bestselling authors Kristin Hannah, Jill Barnett and Megan Chance, film distributor and magnet Ben Hannah, the much celebrated uke players Cali Rose and Craig Brandau (his CD is a bestseller in Japan right now) and Lou and Albert Kaku of Cerritos who were touring the islands and visiting his family in Kona. Thanks to Al for the Tiki Photos. 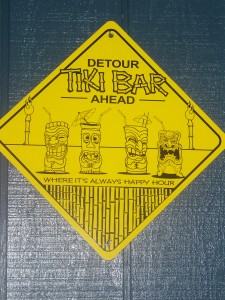 Enter At Your Own Risk

The talented Kauanui duo, Beverly and Patrick, as well as the Hui Hula O Kehaulani dancers and the Namolokama Ukulele Haumana join us weekly. That’s just to name a few of the celebrities who stop by. I’m sure there are more to be mentioned and I’m sure I’ll hear from them if I haven’t. (Keep those comments clean!)

The biggest news is that plans for Book Two of the Tiki Goddess Series is in negotiations.
Am I stoked?? You bet!

So stoked in fact that I’ll send out two autographed copies of Mai Tai One On to two lucky winners who leave the best tropical drink recipe with a comment. The two winning recipes will be  chosen by Julia Witford, the bartender at The Tahiti Nui in Hanalei. It’s Julia’s birthday tomorrow so we’ll give her the honors.

The “contest” closes on October 7th and winners will be announced on October 11th. Remember: leave a tropical drink recipe with your comment for a chance to be chosen for one of two autographed copies of Mai Tai One On.
Aloha!
The Tiki Goddess