Trader Sam’s Part 1: Into the Mist

There are times when even a Tiki Goddess must make great sacrifices, especially if she is also a writer (even though writing has become more of a part time job as hula and tiki-ing around take precedence).

In late December while on the mainland, I took a welcome break from focusing on the Holidays to do some research and ended up where my love of all things Tiki began–at Disneyland in Anaheim.

I haven’t yet met a California Tikiphile who wasn’t inspired by the Enchanted Tiki Room, the “Gateway to Adventureland” where fake parrots sing their mechanical hearts out and weather a tropical rain storm that booms with thunder and flashes lightening right on cue for each packed audience.

Not only did I love the “Tiki Tiki Tiki” Room, but I was so stoked on all things Disney that I worked at the Magic Kingdom every summer and holiday vacation while attending college at nearby Cal State University Long Beach. Though I was typecast and assigned to Fantasyland, I could get into the park free and visit the Tiki Room whenever I wanted! 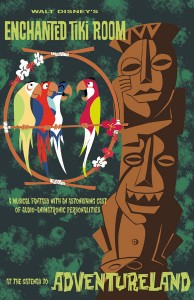 I’d heard a Tiki Bar called Trader Sam’s had opened poolside at the original Disneyland Hotel. I phoned my partner in crime and fellow research assistant Natalie for backup. She was more than willing to delve into the land of Tiki with me. She even volunteered to drive in case I got carried away on a wave of tropical libations.

Since time is at a premium during the holidays and the place is usually packed for the light parade, we opted to skip going into the amusement park and decided to simply explore Downtown Disney on December 23rd. It was the first visit to Downtown Disney for both of us and we were looking forward to shopping and having lunch at Trader Sam’s at the old hotel. 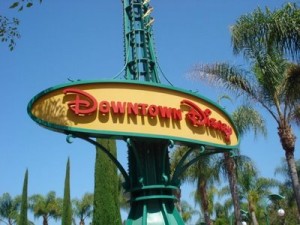 It was one of those really sunny, warm California days that sends snowbirds running to the Sunshine State. We walked the “Downtown” and visited various stores before we headed to Trader Sam’s. 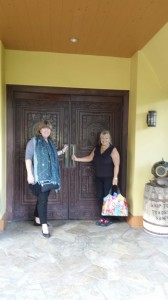 As we walked in the door, the dim, shadowy interior (apparently a definite requirement of a top notch tiki bar) brought us to an abrupt halt as our vision adjusted to the darkness.

A second later, the loud clang of a ship’s bell rang out. One of the bartenders yelled enthusiastically in true pirate fashion. We could see enough to spot an animated video of a sinking pirate ship on display behind the bar.

Another bartender grabbed a spray bottle of water.

“Arrrggghh! There she goes!” He hollered as he proceeded to mist the patrons on barstools hunched over their drinks as well as everyone seated at nearby tables. Either they were beyond caring or didn’t feel a thing. No one seemed to mind the misting. We looked at each other and laughed.

The interior of Trader Sam’s is small, it’s dark, and the walls are cluttered with truly tacky tiki stuff.

I took one look around and breathed a sigh of relief. I was “home.”

Next up: Trader Sam’s Part 2: The Menu

2 Responses to Trader Sam’s Part 1: Into the Mist