Aloha from Tiki-land,
What is a Tiki Goddess? Well to me, it’s any forward thinking gal who walks to the beat of the tiki drums and isn’t afraid to step out of the box. I have a wonderful space where friends hang out and share music, dance, talk story, sip tropical drinks and just have fun.

A friend of mine, Grace Hodgson, who not only plays the violin, ukulele and recently added the stand up bass to her list of musical accomplishments, is also wonderfully talented artist. View some of her work at:  www.imakeart.com

Grace’s main interest has always been the human face and figure. She says, “I can’t think of anything more intriguing than the human face or the opportunity to depict a human personality.”

One day Grace shared that she had always dreamed of holding a gathering of artists once a month but needed a venue. I thought it sounded like a great idea and offered the Tiki Port. 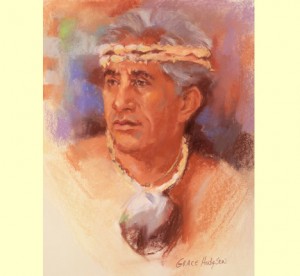 Patterned after a website named Dr. Sketchy, a select group of Grace’s artist friends meet once a month to sip wine, listen to great blues, and sketch live models. Unlike the Dr. Sketchy website idea…Grace’s models aren’t showing any racy body parts. I told her the neighbors couldn’t take it.

With so many Goddesses in our circle of friends, there is no shortage of enthusiastic (aka wild and crazy) gals who want to dress up and pose on a Friday afternoon. 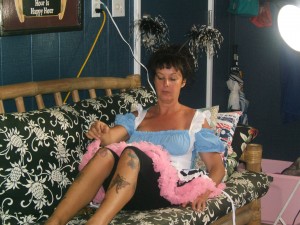 Goddess Julie, hula and belly dancer with an overflowing heart full of fun and plenty of personality, posed at their first meeting. Her costume was an eclectic mix of clothing from the costume shop she once owned. (I have noticed that the Goddesses around here have had many life chapters, changes, and careers.) Everyone loved the bobbing fuzzy pompons on Jullie’s hairband and her “serving wench” attire.

Julie turned on her killer smile for the DaVincis who assembled to launch Grace’s dream that day and everyone had a great time. 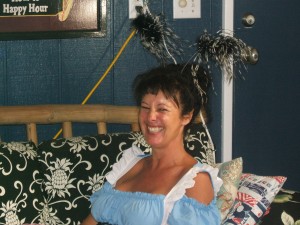 The next model was Anna who appears to have been inspired by Dr. Seuss’s Cat in the Hat. She looked absolutely adorable in her colorful garb. The folks at the Tahiti Nui Bar and Restaurant in Hanalei thought so too when Anna dropped by on the way home to “Mai Tai on On” after her modeling session. 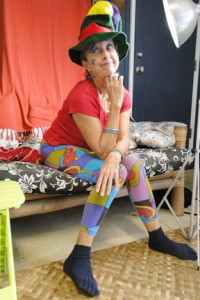 Anna's Whimsical Costume was a Hit

As you can see by the sketch below, Grace had no problem at all catching Anna’s adorable Goddess attitude.

And speaking of attitude! Hula dancer Sandy, another Goddess of much renown, came in hula finery. Sandy really got into the mood by perfecting and holding a May West pose. She also had no idea her appendix would need to be removed in emergency surgery a few days later!

Sandy’s hip-length, flame red hair is stunning, as is her teasing smile. A good time was had by all that day. 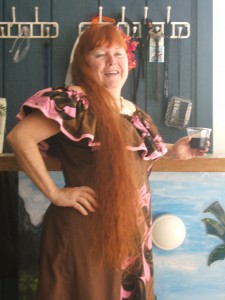 I’ll post some more photos soon and hopefully include some sketches by the other artists. 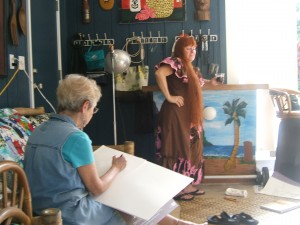 The Tiki Goddesses I know come in all ages, shapes, sizes and colors. They are fearless. They know the key to life is to have fun, laugh, and that life is too short to worry about what the world might think of them.

Maybe there is a Goddess in you?  Leave a comment and let us know. Pass this blog along to any of your friends who might enjoy it too!

One Response to What’s a Tiki Goddess?